When we opened the door to Athens Burger Restaurant on 6999 Dublin Blvd, the delicious smell of char overcame us.  Visually, it was impressive to watch the tables and booths fill up quickly.  Based on the messages received from those two senses alone, we knew that a third, taste, would be on par.  Happy crowds don’t lie.

Many of the menu items are made in house, such as the onion rings and zucchini sticks.  The onions used were super quality and cooked to the perfect point of doneness, so the breading was crunchy and the sweet onions remained slightly crisp.  It’s always a plus to be able to bite through an onion ring without pulling the onion out of the breading.  The zucchini sticks had a different breading than the onion rings with more of a bread crumb base.  Lightly breaded, the sweet tender centers contrasted the texture of the crunchy exterior.  Both the onion rings and the zucchini sticks were yummy, but the ranch dip really complemented them.  Housemade as well, like most of the condiments, the ranch was thick and creamy with a bright array of herb flavors, dill being the star. 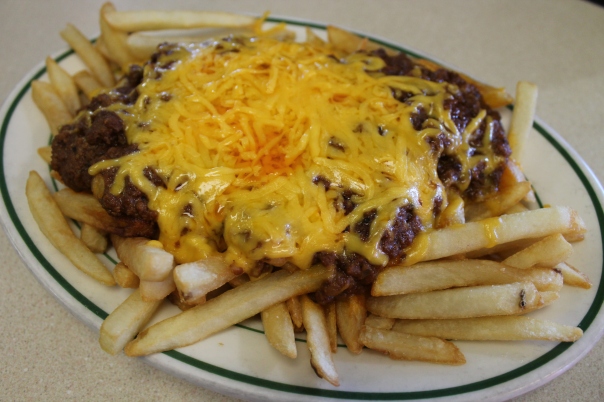 Daily sandwich specials come with a choice of soup, salad, or fries, but Zach wanted to try the chili cheese fries so he upgraded his side.  While the fries were prepared from a frozen state, they were not poor quality.  The main attraction, though, passed picky Zach’s chili test because it was housemade and tasty.  No beans meant more need for meat, so the chili was very thick and hearty.  Medium spices with flavors of cumin and chili powder were balanced well, and tons of cheddar cheese made it gooey and sumptuous.

Zach’s daily sandwich special was the chipotle burger with cheese, bacon, and chipotle sauce.  He doubled the patty and also swapped out the regular bun with seeds for a “junior bun,” so we can attest to Athens Burger’s customer accommodation.  The bacon was crisp and smoky, and the chipotle was more tangy than spicy – don’t be afraid of this burger if heat isn’t your thing, because the chipotle taste is there without the burn.  Loads of fresh, crispy vegetables complete each mouthful.

August ordered a signature burger, The Greek.  This had the same fresh, crispy veggies as Zach’s burger, but with its own cheese and sauce for distinction.  To give this a Greek twist, feta cheese and a housemade Greek dressing were added.  The feta had its oh-so-familiar flavor but was mild enough not to overpower the burger.  The dressing was tangy and rich with olives and a nice vinegar.  It was flavorful but, like the feta, not so much so that the delicious char of the meat was buried.

For dependable quality that entertains multiple senses, Athens Burger ranks high.  The concept of a burger is simple, but execution is key.  The crew at Athens Burger recognizes that, and the pride is apparent in every bite.

For 31 years now, the third weekend of August has been the time of the Hayward Zucchini Festival.  What we saw today was entertaining, and what we tasted was delicious.  It was a little tricky finding our way but once we got to the secured parking lot on Bohannon Middle School’s grass playing field, we spent hours wandering around Kennedy Park enjoying the festival.  From rides and carnival games with hermit crabs for prizes, to jewelry vendors and all kinds of foods, it was easy to spend the day here, especially when the weather was as beautiful as it was.

who’s got the biggest?

As the zucchini capital of California, Hayward would be remiss not to honor the farmers in the community, rural and urban alike.  Entries are accepted through the second day for six different categories of competition, from weight to color variation.

We entered Kennedy Park on the far corner from all the hot food stands and trucks, so we got to walk around and tour the grounds before finding our way to Sweet Delights of Stockton.  They didn’t disappoint with this alternative quesadilla, as cheese and zucchini were all it took for a savory sensation.  The gooey cheese is the hallmark of a good quesadilla, but the fresh vegetables made all the difference. 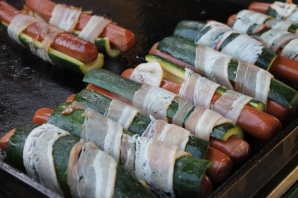 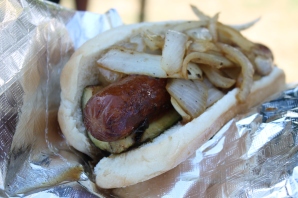 From August’s neighborhood of her youth, California Corn Roast came from Grass Valley and got a big line forming for their  bacon-wrapped hot dogs with zucchini.  Hebrew National dogs and thick spears of zucchini sat in a lightly grilled bun piled with grilled onions.  Condiments were available if wanted, but we liked it just as it was.  The sweet onions juxtaposed the savory, salty kick of the meats, while the zucchini provided an earthiness that brought everything together.  There’s nothing too fancy about this, but if you like zucchini, this is sure to please. 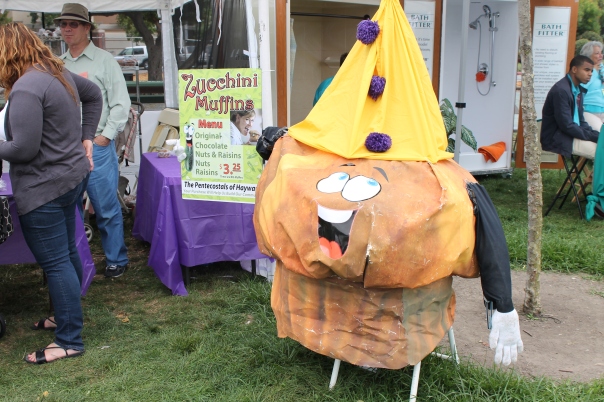 Many groups came out today selling goods as fundraisers.  The Pentecostals of Hayward drew us in with their selection of muffins, all zucchini based but with variety among them.  Regular, with raisins, with raisins and nuts, and with chocolate, we didn’t think there could be so many types of zucchini breads!  Apparently this is a big deal for the church’s community, because they even put together a thick cookbook of zucchini dishes.  We bought a copy, and we’re curious to see how many tasty zucchini recipes fill the pages.

meet michelle and her delicious bread

Michelle’s Golden Brown Breads can be found at the farmers’ market on Sundays at Jack London Square in Oakland.  Today Michelle came with a selection of zucchini bread loafs.  We chose the butterscotch version, with butterscotch visible on top and also marbled through the bread.  Dense, moist, and rich, it’s great by itself but we’re imagining it a la mode. 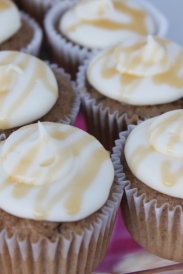 Right around when we thought there couldn’t be any more sweet zucchini goods, Bella’s House of Sweets came into view.  After trying four of the cupcakes and drooling over the mini macarons, we might have to visit the San Leandro bakery sooner than later.  We sampled red velvet, double chocolate, carrot cake, and zucchini cupcakes, all light in texture yet deeply flavorful.  The zucchini cupcake in particular was all we could hope for in zucchini bread: mildly sweet, spiced with earthy tones, topped with cream cheese frosting, and a light caramel drizzle.

Once we ordered two of four zucchini-based items at the Siva Indian Food Services truck, August sat down with one of the daughters of the family business for a henna tattoo.  It was rough keeping still for 30 minutes for it to dry, but let’s hope it’s worth it and the students at school approve!

There were so many stands with deep fried zucchini, but Siva’s zucchini pakoras ranked among the best.  A light but crunchy breading had surprisingly little grease, and it was seasoned well so that it didn’t need an extra sprinkling of salt out of the fryer.  A thin, dip-like hummus was a nice change from ranch, which was what every other food stand had to offer with their deep fried zucchini. 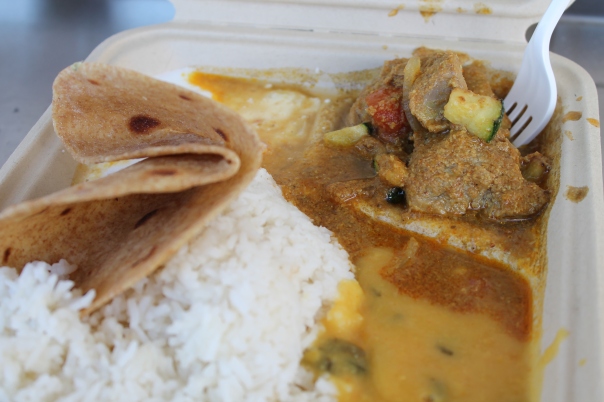 When we see lamb we get it, and Siva’s curry with lamb and zucchini was no exception.  We chatted with the matriarch and she said that zucchini was not something she normally used as the feature in a dish, but we thanked her for being one of the few out of dozens of food vendors that provided something more than deep fried zucchini – even while many vendors had no zucchini at all.  The entrees like this curry come with white rice, dhal (the yellow lentil and potato dish in the foreground of the picture), chapati (thin, flat wheat bread), and raita (a cooling yogurt condiment, hiding behind the chapati).   All exceptionally fresh ingredients tasted great with the lamb, which wasn’t gamey or too tough. 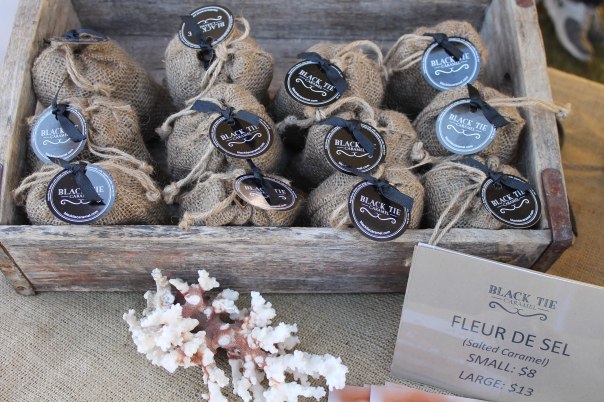 Technically food but not in the food area of the park, we found a few stands with edible goods ready to take home.  Since August can never have too much dessert, we picked up a small bag of Black Tie Caramel.  We tried a snippet of salted caramel on site, and it was super soft and perfectly salted.  The smooth kind without nuts, like we got, was recommended as a nice touch to stir into coffee.

Primo’s Gourmet Food Co. showed mustards, fruit butters, and salsas at two tents.  Fruit butter is essentially jam without pectin or seeds, resulting in a smooth and almost syrup-like spread.  We tasted the berry pie butter and got a jar to use on toast and bagels for school morning breakfasts. 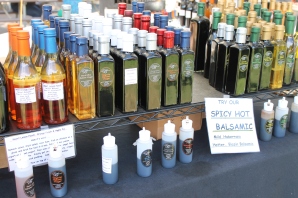 Tres Classique is going through a transition.  Due to suppliers discontinuing the balsamic vinegar that they use for their base, Tres Classique is refreshing their ingredients as well as their label.  We saw Tres Classique items as well as the new California Balsamic line, and after sampling several, Zach picked out a sweet balsamic that tasted like apple pie.  He’s looking forward to using it as a dessert pairing with fruit and ice cream. 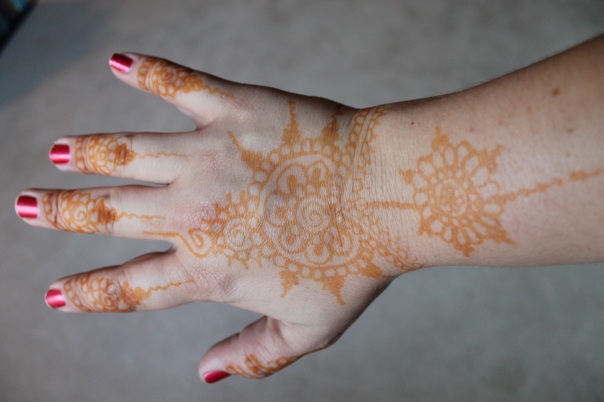 by the time we got home…

The drying process is rough, trying to keep the skin still and not bump into anything.  But once the minimum time was up and all the bits of henna had flaked away, August was left with a beautiful design.  Hopefully this will last at least a week, although sometimes henna designs can last three weeks, so we’ll see!

We came home loaded with loot and stuffed with zucchini.  The festival was well organized with multiple bands scheduled to play, marauding trash patrol, and an efficient parking system.  Happy but not overwhelmed, we had a wonderful time and think that anyone who likes zucchini should make their way here if possible.  Although, even if you don’t like zucchini, there are tons of vendors with no zucchini on hand, so there’s no excuse not to come.

Far from the standard American pasta salad, August grew up with something more Mediterranean-inspired.  Her mom would usually add chicken or shrimp, but this mix can also be made like a side dish or a vegetarian option when meat is omitted.  Pine nuts are also a great touch, if the mood strikes you.

25 grape tomatoes, cut in half lengthwise

1 small can of pitted and sliced black olives

Salt and pepper to taste

Cook the pasta al dente.  Strain and rinse with cold water to take away any excess starch.  Let cool.

In a bowl, combine the olive oil, balsamic vinegar, capers, salt, and pepper.  Also add the oregano and thyme, crushing with your fingers to activate the oils in the herbs.  Whisk together until completely emulsified.

Once you have prepared your vegetables, toss them with the pasta, vinaigrette, and parmesan cheese.  Keep and serve cold.