Monday night can be the most challenging to find a good restaurant for dinner.  If you’re looking for a restaurant that’s better than good, you’ll be even more hard pressed.  Luckily there is The Grand Tavern, a gastropub with New American cuisine and a cozy venue that’s bustling with the sounds of happy patrons every Monday.

Almost wagging their fingers at restaurants closed on Mondays, The Grand Tavern offers Happy Hour all day long for just about everything from the bar.  With that incentive, we tried a cocktail named for a hummingbird in Spanish, el colibrí.  Delicately tart and mildly effervescent with pisco, lemon juice, hibiscus liqueur, peach bitters, and sparkling torrontés, the light taste belied the strength!  It was very tasty, but should be sipped gingerly. 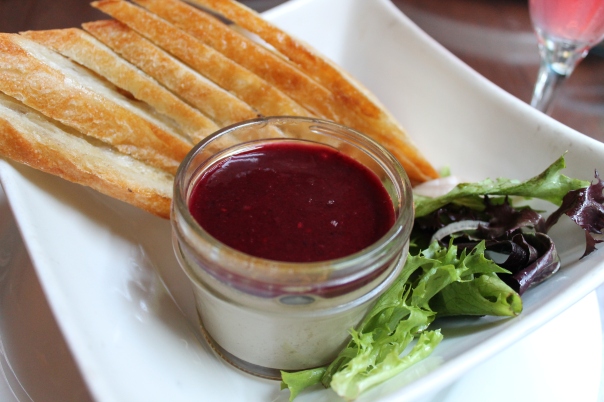 Californians can’t get foie gras so easily anymore, but at least there’s still pâté.  This duck liver with bourbon was layered with house-made blackberry jam and served with Acme garlic toasts.  The bread was toasted just enough to provide something substantial to bite through, as opposed to shattering when bitten (as crostini sometimes does).  Enough about the bread, the contents of the Mason jar were the star.  The mild mineral flavor of the pâté was enhanced by a medium herb background and faint bourbon essence.  Pâté and good bread is already a nice starter, but the blackberry jam set it far above average with a dark sweetness to balance the liver. 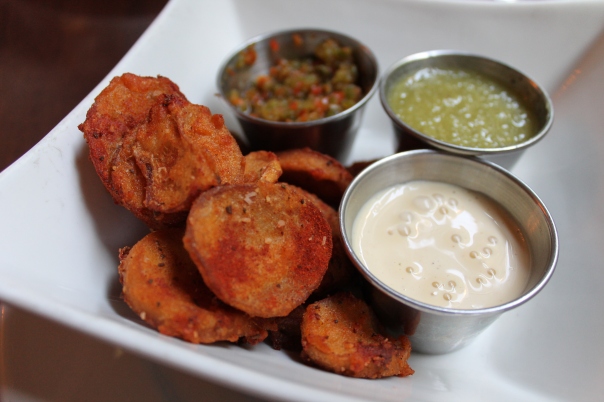 King oyster mushroom in paprika tempura were a delightful vegetarian nibble after the intense pâté.  The crispy breading coated thick mushroom slices with excellent texture that was nowhere near mushy.  The bites were salty and lightly spiced, not spicy, but all three of the sauces had their own kick.  Salsa verde had mild flavors with a medium burn, while jalapeño chutney was more tangy and salty with a strong jalapeño flavor rising above the heat.  The spiciest was the creamy habanero aioli; August, who avoids spiciness when possible, thought the aioli was “super tasty, but what a burn!”  She really wanted a second mushroom with aioli because the flavor was that good, but the heat kept her back.

The beets in this salad really helped cool down our mouths after the mushrooms’ sauces.  It’s important to get more vegetables than just tempura’d ones, anyway.  The braised golden beet salad on arugula had called out to us from the sumptuous selection, and ended up coursed perfectly to relieve the heat.  Toasted pumpkin seeds, fennel frond, fat blueberries, and faintly tangy citrus dressing complemented the sweet, earthy beets and the zippy arugula. 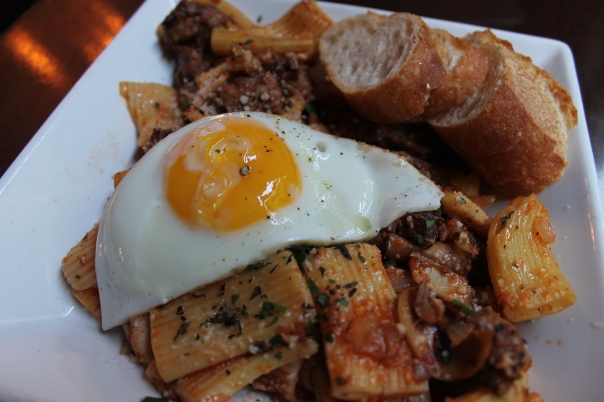 Where there is lamb, August tries it.  In this dish the shoulder was tender, savory, and not gamey, mixed in with al dente rigatoni noodles.  Meaty mushroom slices joined the fun, and the sunny-side up egg provided a soft tender element.  Tomato, yellow onion, and chili flakes made up the chunky sauce, but it was garlic, one of the most important ingredients in the world (tied with chocolate), that brought everything together.

Zach’s chicken was “very, very juicy” with subtle harissa flavors.  The tender chicken rested across corn and mashed potatoes, but not just any corn and mashed potatoes.  The corn was sautéed with cherry tomato halves and wild arugula, resulting in a sweet, crisp, and exceptionally fresh side.  The mashed potatoes were rich with butter flavor and an intriguing horseradish aftertaste.  Jalapeño chutney made an encore appearance here, showing its range in pairing with other ingredients.

Because the restaurant tries its best to work with the seasons, the menu changes somewhat often.  Frequent diners will never tire, and first-time guests will have different stories to share about their wonderful meals and beverages.  And, of course, one thing we can always rely on is that it’s open on Mondays.

Since Easter we’ve had the category Bakeries but we’ve only found two so far that met Zach’s standards.  When we look for bakeries, we expect more than croissants, muffins, and cookies.  True bakeries show depth and breadth of skill; baking is a science, but there is also artistry.  You might think that there must be better bakeries than Whole Foods in the Bay Area, but to be honest, the showcase here is hard to beat.  With a gelato freezer, large cakes, and dozens of mini items, it’s nearly impossible to do a shopping trip here without drooling over the plenitude.

Looking like a tiny frothy latte replete with a handle, the mini tiramisu cup is at once cute and tempting.  A dark chocolate cup, edible through and through, is the vessel for layers of soft and soaked moist cake, whipped cream, sweetened coffee, and cocoa.

Pop a mini pecan pie in your mouth, and you’ll be rewarded with a rich, gooey filling, meaty nuts, smooth cream cheese frosting, and flaky crust.  The cream cheese frosting gives it an extra rich deepness that is usually lacking in pecan pie.  It’s a wonder how many textures can fit in one bite.  Imagine a few of these warmed up with a scoop of ice cream – yum!

This mini tart is a bite of the season, bursting with freshness.  Four types of berries and a kiwi slice top the tart with a delicate tart shell and refreshing key lime filling.  Some key lime fillings are overwhelming, but this one was on the mild side of tart (we know, a tart tart would be bad).

Of the many kinds of cheesecake in the world, chocolate might be one of the most decadent.  If you can’t bring yourself to buying a standard-sized chocolate cheesecake, a mini is ideal for getting the same flavor without the temptation (and subsequent guilt of eating the whole big one).  Details don’t disappoint, all the way down to the tiny chocolate fan.

Even the mini cupcakes aren’t simply frosted and boxed.  Detail is everything at this bakery, all the way down to the precise placement of the swollen blackberry atop vanilla frosting on a white cake base.  It may have simple flavors, but this is not a dull cupcake.

A cart nearer to the cash registers than the bakery has a sign decorated with a Cookie Monster.  If the real Cookie Monster ever visited a Whole Foods, he’d be in trouble.  Pick up a bag, a box, or a tin, and load up with any of dozens of varieties, all for the same bulk price.  Please all of your family members/coworkers/friends with different tastes at the next big gathering you attend.  From alfajores to ice box cookies, all are fresh and delicious.

Don’t waste time going to a “bakery” in the East Bay, when Whole Foods provides any treat or dessert imaginable plus so much more.  If you haven’t been to a Whole Foods yet, find your local store and take time to explore.  The smells, sights, and tastes are indicative of the quality.

Serving strictly breakfast, lunch, and special brunch on Saturday (closed on Sunday), 900 Grayson has built a name for itself on pillars of freshness and quality.  Had this place been around when August went to Cal, she would have been so frequent they’d know her by name.  We came here for lunch on a Friday, and like all the other patrons filling every seat in the house, we left full and satisfied.

Much of the owners’ intent is based in what’s local and available in season.  The current selection for the seasonal veggie side included broccoli, romano beans, cherry tomatoes, rainbow chard, summer squash, and carrot.  Each bite was fresh and, while cooked, still had a bit of give from the natural texture of the vegetables.  Light seasoning complemented all the greens (and reds and oranges).

Zach had the Grayson Burger, which put the place on the map as one of Zagat’s “25 best burger joints” earlier this year.  A natural beef patty comes with apple wood smoked bacon, New York white cheddar, shoestring onions, and house-made barbecue sauce on a soft Acme French bun, with herb French fries as an automatic side.  Zach thought the patty was particularly lean and juicy, cooked to his desired temperature on a good, clean grill.  Hand-forming results in a tender, not tough, burger.  The mild white cheddar and crisp smoky bacon added extra creamy and savory layers, and despite being a fully loaded burger, the bacon was more meaty than fatty, therefore not adding so much grease.  Zach says you’d better have good teeth, because this bacon is almost all meat and very high quality.  Crunchy onion strings and a lightly smoky and tangy barbecue sauce are finishing touches, but were necessary to make this burger mouthwatering and complete.  Zach thought the fries were cut in-house so we were surprised to learn they were frozen, albeit from a very good company, so they didn’t taste like they came from a frozen state; most frozen fries are made from potato puree, extruded and molded to look like fries, but the fries here were cut from whole potatoes.  Zach the supertaster was nearly fooled by the quality and preparation. 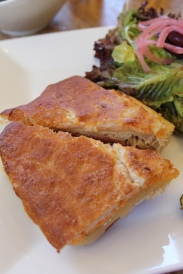 chef’s sandwich of the day 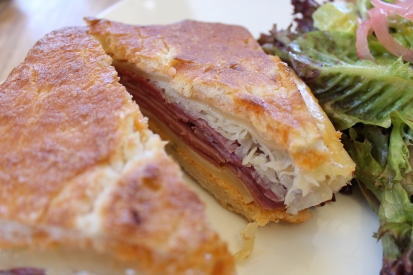 The chef’s sandwich is a daily creation with choice of a salad or herb fries, and luckily for August, the day’s feature was a Reuben.  Instead of traditional rye bread, this one came on buttery salt focaccia, warmed and crunchy out of a panini press.  Thick slices of meat gave this sandwich some real chew.  The sauerkraut was crisp, tangy, and house-made, offset by a semi-sweet French dressing.  Thanks to the panini press, the Swiss cheese was nicely gooey without getting oily and soaking into the focaccia.  Since Zach already got fries with his cheeseburger, August chose a side salad.  The colorful, fresh lettuce was tossed in a light shallot vinaigrette, and the firm beets and zingy pickled onions, both made in-house, were excellent for this summery mix.

We sat near the front and were able to eye the desserts at the counter, so we couldn’t pass up an ice cream cookie sandwich made with decadent fudge cookies like those we had been staring at through the meal.  Extremely rich chocolate flavor held creamy vanilla gelato, accented by homemade strawberry jam with chunks of fruit.  The jam was not overly sweet, in fact it was more tangy and true to real strawberry flavor.  The hand-whipped whipped cream was lightly sweetened, providing a light and smooth texture without overpowering the rest of the dessert.

For our 300th post, we couldn’t have asked for a better lunch.  We anticipate coming back for a Saturday brunch, or to try the whimsical “Hobbit” selection, or a “TV dinner” – like the chef’s sandwich, is a daily special with “a veggie and a starch” that pleases diners’ nostalgia and palates.  The entire menu is tempting, be the items quixotic and inspired by fiction or based in reality, so we’re sure anything had here is delicious.