games in the back yard (can you spot the birdie?)

Every year on a Saturday near the Fourth of July, August’s family has a reunion at her grandmother’s house just south of Mammoth Lakes, CA.  Some family members come from as far as Colorado for one afternoon!  It is always a wonderful opportunity to catch up with each other, and of course, share a meal.  Because some people had to travel, not everyone could bring a homemade potluck item.  However, some salads are staples and are expected to be brought every year.  Sandy loves Nanci’s pasta salad, August loves Laura’s potato salad, and it goes around and around.

August’s grandfather built the house that her mother grew up in.  At 91 years old, her grandmother still lives here and enjoys views of the White Mountains in the east and the Sierra Nevada range ending in her backyard.  Behind the house, built into a retaining wall, is a barbecue pit.  Every branch of the family brings a side and/or a dessert to share, but the meats are cooked here communally.

scotty and the bota

Being Basque, the family is all about sharing, community, and good times.  Taking wine from a bota is a Basque tradition, and Cousin Scotty is one of the best in the family.  August’s grandpa taught Scotty how to drink from the bota when he was ten.  The goal is to maintain a steady stream flowing from the bladder without spilling any wine, and today, those who tried were all successful. 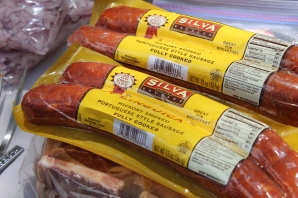 A tradition that never falters for how we begin our reunion is a linguiça appetizer.  We grill the linguiça and serve it with choice of jack or asiago cheese, tomato, red onion, and mustard, on sourdough slices.  We like a milder linguiça (our family doesn’t do spicy), which is enhanced by the snappy onion and spicy mustard.

We cannot start our reunions without linguiça first.  The kids, who have only come for a couple of years, even know that it’s not a reunion if we don’t have linguiça!

After linguiça, we dug into Cousin Sandy’s tasty dip/salad.  With chips it’s a dip, and with a fork it’s a salad!  Almost like a super chunky guacamole, she mixed avocado, black-eyed peas, corn, tomato, cilantro, and green onion, with a dressing of red wine vinegar, olive oil, garlic, and cumin.

Cousin Sandy is married to Ted, who works with fruit.  They always bring the most delicious selection of fruits.  This three-fruit mix of strawberries, cantaloupe, and blueberries was simple, but perfect for the season. 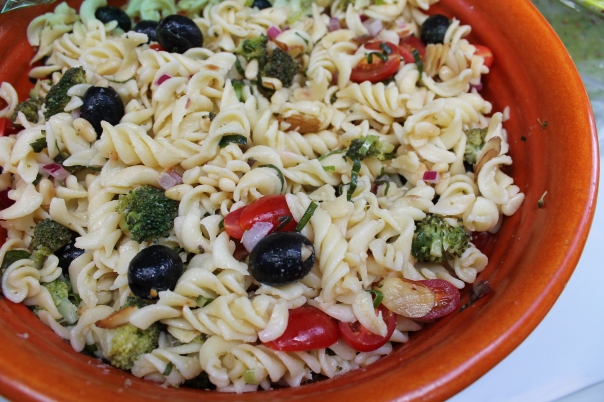 August’s mom Nanci made her enviable pasta salad with lightly steamed broccoli, grape tomatoes, black olives, red and green onion, pine nuts, sliced and toasted almonds, and Parmesan cheese.  Served cold and without a heavy dressing like many versions of pasta salad, this is a great summer side.

All of the salads were so tempting to look at as we waited for the meats to be done.  At least it gave us lots of time to chat and relax. 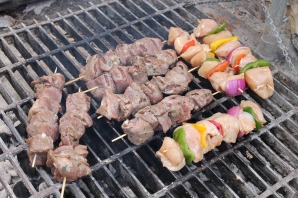 Every branch of the family had their own meat, but the men worked together to prepare it all.  Shuffling the meat around on the pit made with a repurposed snow grate, everything was cooked perfectly.

This was not our biggest reunion, but with the turn out we had, the spread of food was pretty good!

Finally, time to eat a meal that we had been waiting for since last year!  Seriously, this is one day that many of us look forward to, not just for family but also for food.  Nanci brought boneless ribeyes for our branch, and she “salad dressed” them with what she found in Grandma’s kitchen: olive oil, white balsamic vinegar, garlic, salt, and pepper.

The kids couldn’t wait too long for dessert, and frankly, neither could the adults.  Cousin Angie brought a strawberry rhubarb pie, but she gave credit to her young daughter Jadyn for making the lattice.  That’s not a bad job at all for a six-year-old!

Cousin Sandy, along with her avocado dip/salad and fruit salad, also made brownies.  These were rich and smooth, with chunks of walnuts and a light chocolate frosting on top.

Cousin Kelly brought lemon bars in addition to her bean salad.  She used her son-in-law’s mother’s recipe, and was worried that they didn’t turn out.  There was no reason to worry, though – the crust was flaky and crisp, and the lemon flavor was strong but not overly acidic.  It was a great summery treat to round out the meal.

There were a few store-bought items, but we wanted to show you things that our family members were proud to cook.  None of us treat the reunion as a cooking competition, although we do compare notes and commend one another.  We do these reunions so that we can catch up, but the food brings us closer together.