We were a little concerned that we had no plates before us when the food started coming out, until we realized that this restaurant serves you in true family-style.  Feel free to reach across the table – this way of eating promotes camaraderie, community, and compassion.  The traditional sides served with a meal are banchan, and here they are plentiful and varied.  Pickled potato in a sweet sauce, kimchee, dried fish in a spicy sauce, seaweed salad… there were several items we could identify, but several we could not.  Regardless, trying all the banchan was fun, mysterious, and tasty. 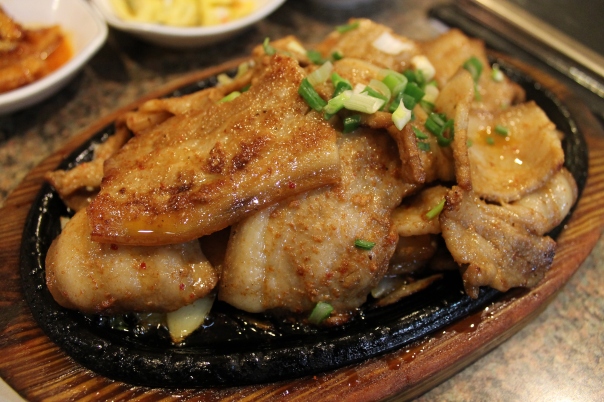 Barbecued pork belly with sesame oil, green onions, and white onions was the first dish to come out.  It is served with romaine lettuce to make your own wraps, although we just went at it with chopsticks and forks.  The pork had a mild sesame taste thanks to the oil; the meat itself was very tender.  The caramelized white onions underneath the pork were sweet and flavorful since they soaked up the meat juices and sesame oil.

This soup was simple but tantalizing.  Known in English as rice cake and dumpling soup, it had lots of wontons and rice pasta (actually rice cakes, but of a pasta texture). With a rich chicken-flavored broth spiced with traditional Korean spices, the wontons were succulent and maintained their texture well.  The rice cakes added another layer of texture; they were different from what we’ve ever had before, but they were definitely enjoyable.

The menu lists #19 as a Korean style pancake with green onions, scallops, and oysters.  We did not get scallops and oysters in ours, though; instead, we had shrimp and octopus, and frankly Zach enjoyed it more!  This was not of our choosing, it just came out that way.  Served with a sweet sesame sauce on the side, this is essentially like a thick, stuffed crepe – somewhere between an omelet and a fritter.  We enjoyed the pancake without the sauce, as it had enough flavor on its own.  There were plenty of pleasant textures bouncing around, as well, between the different seafoods, the pancake, and the onions. 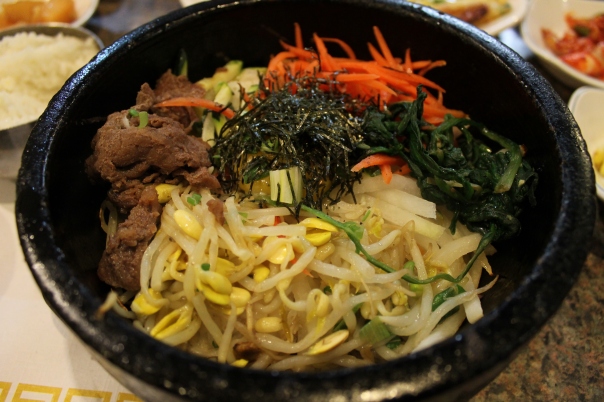 Mixed vegetables, beef, fried egg, and sticky white rice are served together in a hot stoneware bowl for bibimbap.  This is one of the most traditional and recognizable dishes from Korean cuisine, and our waitress recommended that we try it.  With a nice assortment of fresh vegetables, the meat was super flavorful, and the most interesting part was mixing it up.  It’s almost like a lower-fat version of fried rice, because the fried egg yolk is nearly raw, meant to be broken and stirred into the bowl.  Since the stoneware bowl is so hot, it aids in cooking the egg further into the dish.

This is a small establishment in an unexpected neighborhood, but worth a try.  Zach can’t wait to go back and try some more.  Be aware, all the food we got was enough for five to six people and we brought most of it home, so order with caution!