Off the Grid, Ft Mason in San Francisco CA

Ft. Mason is a hub of infinite activity, and year after year we find ourselves here for the San Francisco International Chocolate Salon. We’re doing a “staycation” weekend for our fifth time at the Salon, checking into the Suites at Fisherman’s Wharf and touring the City through food. Fitting that our last stop this weekend would be at Ft. Mason, so was our first one for Off the Grid.

off the grid welcoming arch

We’ve been to enough Off the Grids (like this one, this one, this one, and this one, twice), so many of the trucks here this night we have seen before. But, with a space as big as the parking lot at Ft. Mason, there were over two times as many vendors here as any of the OTGs we’ve been to before, so we found plenty of delights from trucks (and canopies!) that were totally new to us.

At our previous OTGs we had never seen canopies, but they were aplenty here. Fritas Shack was the first of the non- truck food stands that caught our eye for their lamb tacos. The two deep fried taco shells were super crispy and very reminiscent of Jack In The Box tacos, but with luxurious and luscious lamb. With very few, simple ingredients (onions, cilantro, cotija cheese), the meat was allowed to shine. It had been braised and then pulled, so it had a smoother, more delicate texture than any chewier meat you’d find in almost any other taco. 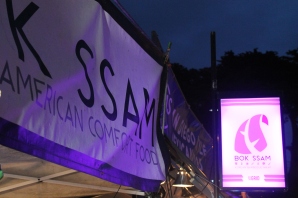 While ordering, waiting for, and eating our lamb tacos, we surveyed Bok Ssam next door and we couldn’t resit their version of chicken and waffles with coleslaw. The chicken was all thigh meat with a supremely crunchy batter, drizzled with a lightly sweet and salty soy glaze. Backed by traditional buttermilk waffles but with a hint of vanilla, the flavors of the chicken, its batter, and its glaze melded so well with the vinegar-based coleslaw. The freshness of the coleslaw lightened up what had the potential of being a heavy dish. 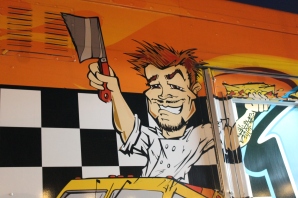 Drewski’s had been on our radar before, so this time we didn’t let it blip by. Zach’s kicking himself just a little for not trying them out before today, because “hands down, (this is) the best fried mac I’ve had so far. There’s a lot that have good flavor but they’re really greasy, or the ones that aren’t greasy are super dry in the center.” The trio of deep fried mac and cheese balls with smoky bacon and a proprietary spicy sauce was served so piping hot, we had to crack them and let the heat ascend into the rapidly darkening night sky. Proportionately, the ratio of breading to macaroni center was on point. The glue holding together the macaroni center was creamy and cheesy, not at all dried out from the frying process. We didn’t catch what made the sauce spicy but Zach suspects it was chipotle; it was creamy but it packed a bunch that sneaked up on us.

Because Zach can’t resist a tagline like “Eggs On Everythang!” we tried the sliders from Hula Truck. The Twin Peaks sliders, made of succulent Kalua pork and each with its own fried egg, were served on Hawaiian rolls with “Bacon JAMMMM and our special Hula sauce.” It’s quick and easy, simple, Hawaiian comfort food, so if the ingredients sound appealing to you, then you won’t be disappointed.

Dessert came in two rounds tonight, the first from 3-Sum Eats. As a special for St. Patrick’s Day only four day’s away, the truck was making whiskey espresso whoopie pies as big as teacup saucers. The cookies’ texture was somewhat cake-like with chocolate morsels scattered throughout to give something to chew on. Between the two cookies, the buttercream filling was smooth and rich. This treat is suitable for children despite the name – the whiskey flavor translated into a muted smokiness to highlight the dark coffee and chocolate. We weren’t about to dissect the whoopie pie just to pinpoint where precisely the whiskey and espresso laid among the cookies and the filling, so taking it bite by bite as a whole, it was overall a delightful goodie.

For the coup de grâce with a little je nais se quoi made à la minute, we had foie gras and raspberry cotton candy – an avant-garde and risqué pairing of haute cuisine by Sugar & Spun, whose owners love to experiment with molecular gastronomy. The tangy tart and sweetness of the raspberry cotton candy base would have been overwhelming on its own without the salty foie gras to balance it, and all at a fair price. The foie gras had been freeze-dried, powdered, and liberally shaken onto the mounds and mounds of cotton candy. Combining sweet, savory, tangy, and tart, with the richness of foie gras and the sprightliness of raspberry, this is something to put on a bucket list. To eat this, one must be wary of the weather: wind can transfer the foie gras from the fairy floss to your clothes, and the humidity will make the fluffy clouds shrink after not too long.

We must admit, we were a little daunted by coming to Ft. Mason on a Friday night. We had only ever been before arriving on a Sunday morning, early enough to find very close parking and also in broad daylight. But parking is vast and you’ll no doubt find some, just as long as you’re ready, willing, and able to amble next to an expansive view encompassing a myriad of boats with bosky hills in the horizon. There are broad walking areas, public restrooms, and multiple driveways, so non-locals should have no issues going on a foodie adventure any time there is one at Ft. Mason.

Kartoffelsalat, also known as German potato salad, is notably different depending on region.  Northern Germany makes potato salad with mayonnaise, similar to American potato salad; in the south, however, the dressing is made with oil and vinegar.  With apple cider vinegar, there is a bit of tanginess to this salad that livens up the side dish.  Caramelized onions balance the vinegar with a touch of sweetness, and just about anything can be improved with bacon.

Salt and pepper to taste

Slice the potatoes in half and put in a large pot of water that has been salted with 2-3 tbs. of kosher salt.  Boil over medium-low heat for 45 minutes.  By cooking low and slow, the potatoes won’t break apart.

Once the potatoes are done, drain the water and, while still hot, mix the potatoes with the bacon sauce and parsley.  Taste and add salt and pepper if necessary.  Serve warm.

We couldn’t think of a better Sunday morning brunch with friends than maple bacon doughnuts, but no doughnut shops in our area offer such a delight.  Zach thought a little more, and figured that making them from scratch wouldn’t be so hard.  Because the dough is fried and not baked, there is no need to let the dough proof or rise, so making these is fairly quick.  Of course, you can amend the recipe by not including bacon, but why do that?  The sweet/salty combination is hard to beat!

At least 48 oz. of vegetable shortening (or however much you need to fill a skillet or deep fryer enough to submerge the doughnuts; we used 96 oz.)

Prep the bacon by dicing it and cooking the bits in a medium to large saute pan over medium-low heat.  Drain and let cool.  In a small sauce pan, melt the butter so that it browns just a little; let cool.  Line one sheet pan with parchment paper, and another sheet pan with two layers of paper towels.  Whisk together the flour, vanilla’d sugar, baking powder, cinnamon, nutmeg, salt, and baking soda in a large bowl.  In a medium bowl, whisk and fully combine the buttermilk and eggs.  Add the melted, lightly browned, cooled butter to the buttermilk and eggs, and whisk again to combine.

Make a well in the middle of the flour mixture, and pour the liquid mix into the well.  Slowly fold the flour into the liquid with a spatula so that a sticky dough is formed.  Turn the dough out onto a lightly floured work surface.  Sprinkle the dough with a little flour and pat out gently until it is about 1/2″ thick.  Cut the dough into approximately 2″x3″ rectangles, and transfer to the parchment-lined sheet pan.  Let chill in the refrigerator until the vegetable shortening is ready for frying.

Heat enough vegetable shortening in a deep-sided skillet or deep fryer so that the doughnuts can be fully submerged.  The temperature should be 365-370 degrees F.  Make the glaze while heating the shortening by whisking together the confectioner’s sugar, whole milk, and maple extract. 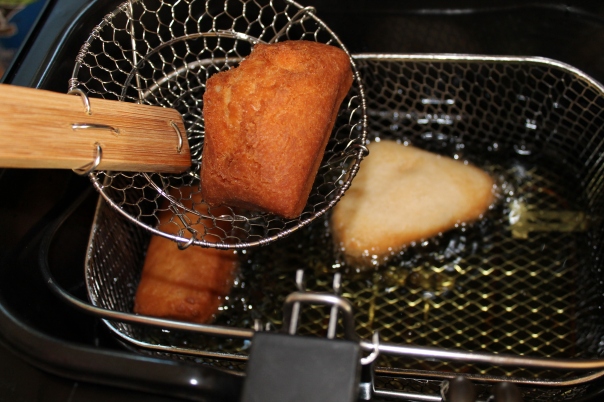 scooped with a spider

Once the shortening is hot and ready, fry no more than 3 doughnuts at a time, allowing at least 1 minute in between adding each one to the fryer because you don’t want to shock the hot shortening at all.  Flip over when the bottoms have browned, about 2-3 minutes each side.  With a slotted spoon or spider, remove the doughnuts from the fryer and transfer to the towel-lined sheet pan to drain and let cool.  Dip the top side in the maple glaze and sprinkle bacon pieces over the glaze.  *Tip: If you want a thinner glaze, dip when the doughnuts are hot.  If you want a thicker glaze, let cool and then drizzle the glaze.