San Francisco is a hub of converging cuisine where just about any flavor can be found, and thankfully that includes foie gras. After a stint on the banned list, foie gras is once again available in California. Chefs across the state are free to continue exploring the ways foie gras can be manipulated to suite any meal. Knowing that some of the most forefront creativity would be in San Francisco, Chef Zach googled “san francisco foie gras” and that’s how we found ourselves arranging a visit to the Mission location of Humphry Slocombe. 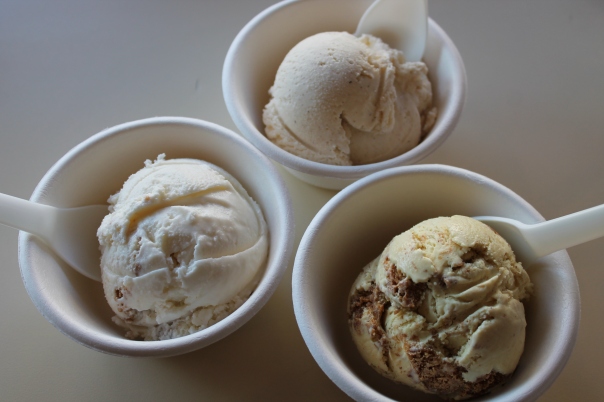 Of the dozens of flavors made, the parlors keep available a handful at a time. If we lived in the City, we would be hard pressed not to visit daily as an excuse to see what’s on the menu. But being that we a party of two in our first visit, three scoops seemed like a good sampling.

Too often people might think “spicy” when they read “curry” but that’s furthest from the truth here. The curry for the peanut butter curry ice cream added an element that was reminiscent of a southeast Asian flavor profile. Natural peanut butter, ground finely, has a cookie dough texture when frozen. This provided a nice texture to an otherwise very smooth consistency.

The texture of the horchata ice cream was different from that of the peanut butter curry, due to the natural cinnamon. The cinnamon flavor was not overpowering, but it was essential in order to bring a hint of grittiness, just like Mexican horchata has. This left our mouths feeling the same as if we had sipped real horchata (and that’s not a bad thing).

We played along and did not ask about the secret of the “secret breakfast ice cream” until after tasting it and having a difficult time placing the flavors. Once told, though, it all made sense: bourbon ice cream with corn flake cookie crumbles. Kind of like how bourbon was the secret “coffee creamer” for the grownup adults when visiting Grandma’s, bourbon and breakfast go together in a nostalgic way for August. Humphry Slocombe flavor creators must have had some similar experiences! The ice cream itself was lighter in texture than the peanut butter curry and not as creamy, but just as fulfilling. It was not unlike polishing off a bowl of cereal. The unique flavor of the ice cream with nibbles of corn flake cookies gave this dessert a definite sugary-cereal-on-a-Saturday-morning vibe, but with an adult twist.

A generous bite of foie gras ice cream waits between two delicate gingersnap cookies. This is what to expect when ordering a foie gras ice cream sandwich, but you can also expect that they might run out just before you get to the front of the line. Despite the limit of one per customer, these little sammies fly out of the freezer from the moment they’re announced on social media. We were lucky enough to try them because we reached out ahead of time and Sean, a Humphry Slocombe honcho, made sure to set some aside for us so that we could write about them here. The ice cream had a caramel-like background flavor, but the foie gras truly was the star. It helps that the texture was very smooth and velvety, just like real foie gras. The gingersnaps were super crunchy and flavorful, which further highlighted the ice cream’s rich taste and texture.

Humphry Slocombe is Zach’s new favorite ice cream parlor. We will not hesitate to drop by any time we’re near and neither should you, no matter the day of the week, even with a line out the door, since the line moves fast and flavors rotate daily. It’s worth it to circle the block to find parking if you’re not a local. No matter what you try in the parlor or pick up to bring home, you won’t be disappointed by the inventiveness and quality.