Spanish dining is typically slow and relaxed.  Your server will bring your order very, very quickly, but there is no rush to finish the dish and clear the check so that the next party can take your table.  César is just like any restaurant in Spain in this regard: the tapas come out almost faster than you can blink, but after that the pace is set by the diner.  Keep the daily menu at the table and order the tapas one at a time, so that you can savor and appreciate each individually. 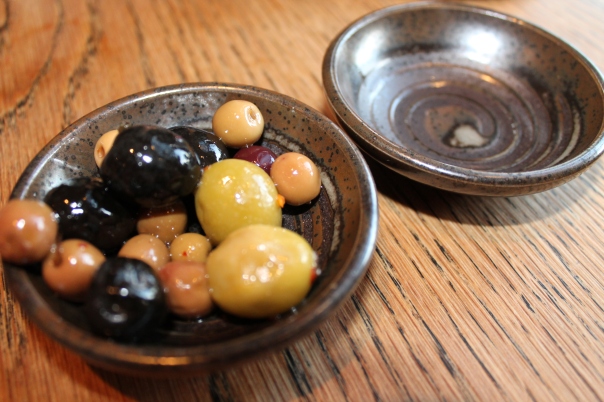 We started our dinner as soon as we sat down, nibbling on this sampling of marinated olives.  Zach had never seen such tiny olives amidst the regular sized ones he was used to seeing!  All were quite tasty, as each type of olive had its own unique brine or cure. 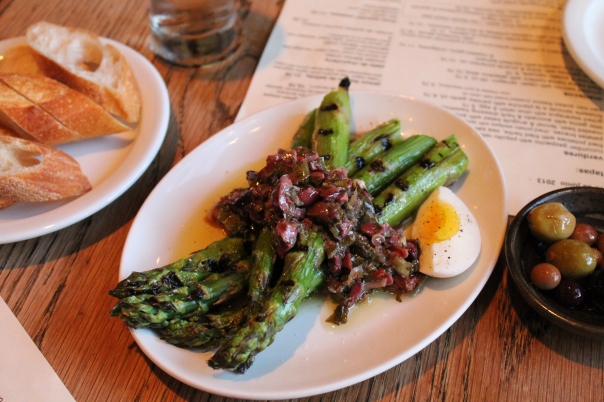 The chilled, grilled asparagus was a refreshing salad like none other.  Well, a form of a salad; it was our roughage of the night.  Salads don’t have much variety in Spain anyway.  The only salad August ever found while living there was iceberg with onion, tomato, tuna, egg, white asparagus, olive oil, vinegar, and salt, and sometimes not even all those ingredients.  But whole vegetables are popular, raw or boiled or roasted or grilled.  With the bright and salty olive tapenade, the crisp asparagus was hard to share. 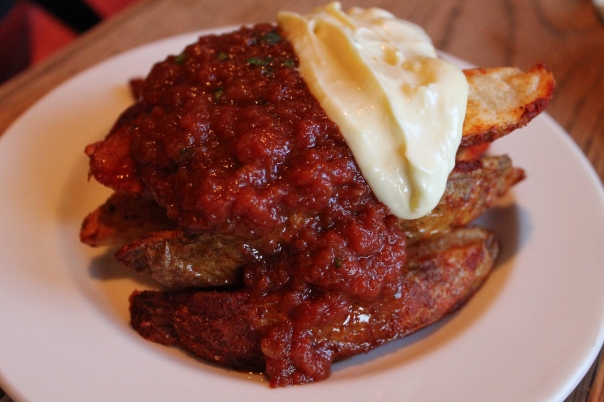 Fried potato wedges with spicy brava sauce & alioli piled for a not-so-small plate, with multiple layers of flavor.  Spanish food is spiced, but it is not spicy hot.  The potatoes were seasoned with just the right mix of peppers to bring a tiny hint of heat to awaken the taste buds.  The brava sauce was sweet and smoky, almost like an American barbecue flavor but with a richer tomato base.  Spain is the birthplace of mayonnaise, but alioli is essentially a fancier version.  After noting the creaminess that it added to this plate, Zach said he will make some alioli/aioli soon. 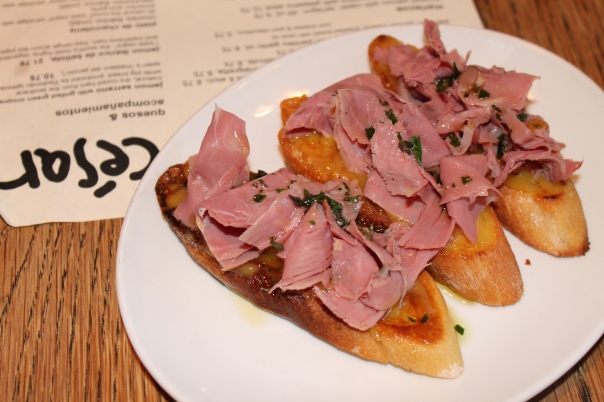 Duck was a surprise to see on the menu, so of course we got it.  It was lightly smoked to allow the true duck flavor to shine, while the texture was supremely tender.  The bright, creamy, and refreshing orange alioli was naturally sweet and well paired for the meat.  The slices of bread were firm but not hard or tough.  It’s the bread slices that make these feel like “typical” tapas such as those found in the Basque region of Spain (in particular the city of San Sebastián aka Donostia, the tapa capital of the world and August’s favorite city in the world, as well). 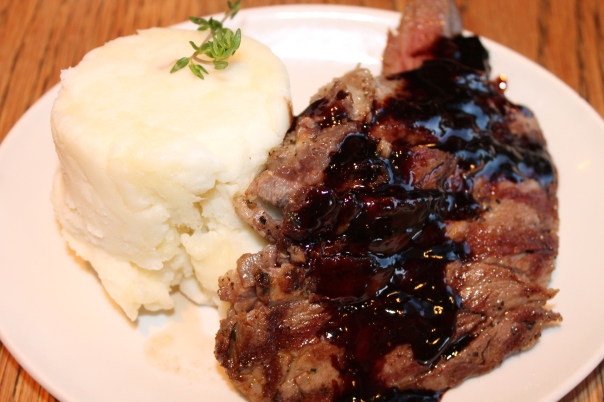 Pata negra, the nickname for the meat of Iberian black pigs who feed on mostly acorns, has a mildly nutty and pleasantly earthy flavor.  For this final savory tapa we got a 5 oz. shoulder cut of pata negra that was extremely tender and sliced perfectly for sharing.  It was drizzled with a savory and delicious wine reduction, which went well equally with the meat and the potatoes.  Mashed potatoes with some firmness and height were unexpected here even though the menu said “mashed potatoes,” because from August’s experience in Spain, mashed potatoes didn’t exist there.  The closest she could find was puré de patata, or potato puree, that was closer to soup than mashed potatoes. 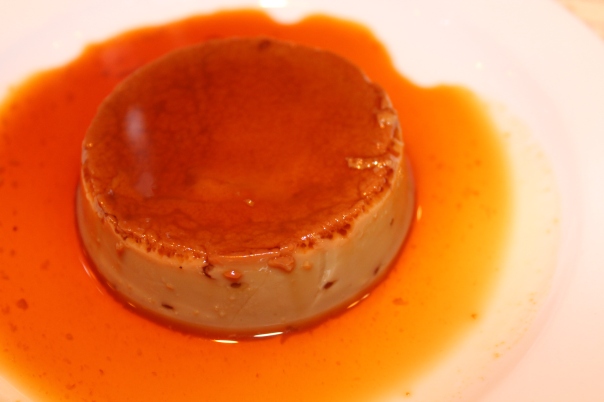 Just about everyone knows what flan is; since it’s popular not only in Spain but nearly all of Central and South America, it is almost invariably part of the gastronomic scene wherever there is a population of Spanish speakers, local or migrant.  Flan is so universal, spellcheck doesn’t red-squiggly underline it.  This flan, though, might start catching on.  Yes, the texture is smooth, velvety, and magnificent, which is something to be proud of, but the bigger deal is that it is made with coffee!  The coffee flavor provided a very distinct and robust richness, like that of a high quality bittersweet chocolate. 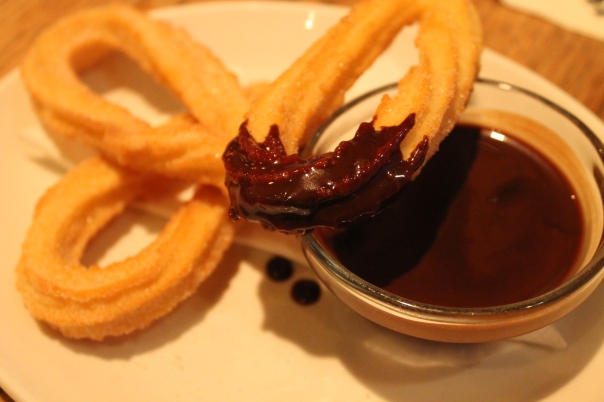 churros with chocolate sauce from spain

Speaking of chocolate, this sauce was apparently brought in from Spain.  It made such a big journey, and here we are dipping with it.  One of August’s common breakfasts while living in Alcalá de Henares was a big churro from the bar up the street plus a tall, wide mug of thick hot chocolate.  This comes very close to her memories, flavor-wise.  The churros tasted sweet and of cinnamon, with an added bonus of lemon zest.  The lemon zest was new and different from the standard churro, but totally right.  August and Zach have discussed before if chocolate and lemon could work together, and here we got the answer. 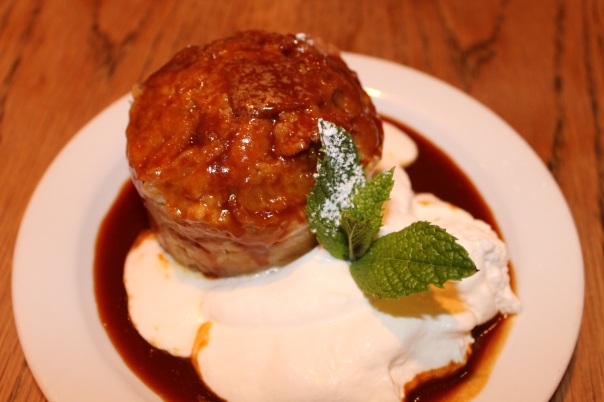 Whipped cream and caramel sauce acted as moats around the mini loaf of tender and light bread pudding.  The whipped cream was made by hand, and the caramel sauce was mildly flavored with orange so there was a citruc-y aftertaste to it.  The bread pudding itself, though, was very decadent.  This is something you have to share, maybe even with three or four others.

This was Zach’s first time at César, but August had been here once before around ten years ago with her mom.  Today was also somewhat of a significant anniversary of one of August’s goals from her past, so our dinner here was a rekindling of memories as well as a delicious celebratory meal.  It’s a great restaurant to bring a date, your friends, and your family, but reservations are not accepted so be prepared for waiting if it’s a busy night.  But don’t worry, the restaurant closes at midnight so everyone who wants to, will get to eat.