This Cinco de Mayo we stayed at home instead of celebrating the 151st anniversary of the Battle of Puebla in public with lots of reveling Oakland denizens.  We didn’t go all out to do a party or anything, but instead Zach put a gourmet twist on two Central American standards for a snack lunch.  We try to follow sustainable seafood guidelines, so the ingredients used were with thought towards the impact on the environment. 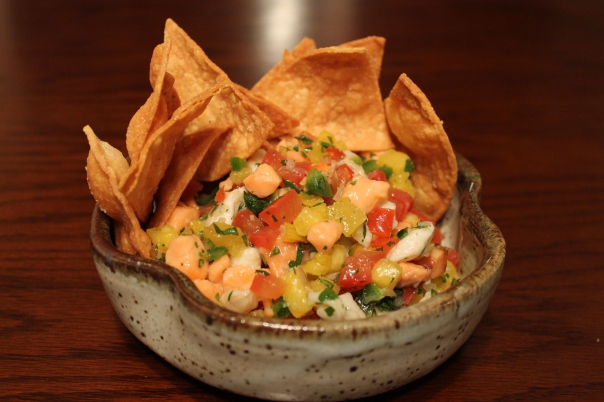 3 liters of peanut oil for frying

Truffle salt for seasoning to taste, but you’ll probably use at least 1 tbs.

Heat oil to 370 degrees F in a deep fryer (it’s possible to fry in a cast iron pan or a dutch oven, but then you’ll have to monitor the temperature with a candy thermometer).  Cut the tortillas in half, then slice each half into thirds, creating evenly-sized triangles.

Place one fourth of all the triangles in the fryer at a time so as to make small, thoroughly cooked batches.  Cook for about 4-5 minutes but stir a couple times with a skimmer.

If you have a sturdy fry basket, shake and/or tap it to knock off any excess oil, and let drip for about 20 seconds before tossing the chips in a stainless steel bowl with truffle salt.  Transfer to another bowl lined with paper or cloth towels (to be green) to soak up the remaining oil.  Chips will stay good in a sealed sandwich bag for days!

• For the ceviche (all local ingredients except the Hawaiian pineapple):

Cube the fish 1/4″ pieces, and soak in lime juice for 30 minutes in the refrigerator.

Dice the pineapple and tomatoes in the same size as the fish, first removing the tomato seeds.  Remove the seeds from the jalapeño, and cut into 1/8″ pieces.  Finely mince the shallot and cilantro like the jalapeño.

After the fish has finished soaking, drain with a strainer and discard the lime juice, shaking off any excess juice.

Toss all ingredients together, tasting for desired saltiness, and serve cold in Arakawa Pottery.