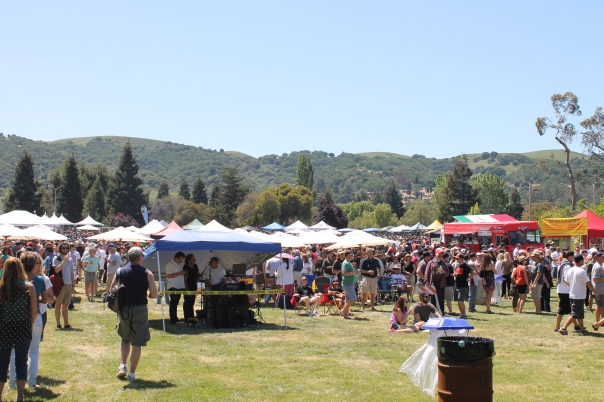 For four hours on a beautiful Saturday with the right amount of coastal wind to set off a gnarly sunburn (we forgot sunscreen), we and thousands of others partook in sampling from nearly three dozen breweries west of the Mississippi at the Bay Area Craft Beer Festival.  Frankly, it was August who did most of the sampling since Zach got a designated driver ticket – always drink responsibly, and have a plan for transportation!  We had the best intentions of talking about every single brew tasted, but to be honest, and we think you understand, by the end of the four hours everything just tasted like great beer.  We took pictures the whole time so this post has more of a photojournalism angle without so many words. 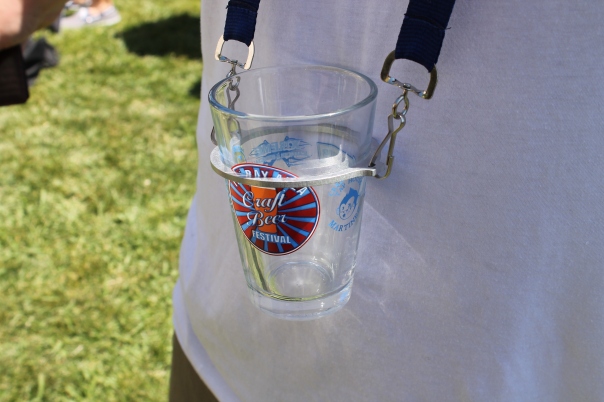 Brew Caddy makes custom beer cup holders.  Of course we all bought one (August, Zach, Zach’s brother Will, and about a half-dozen of Will’s friends).  Throughout the day we were asked, “Where did you get that?” and we happily pointed patrons to the Brew Caddy tent, where they also had hats and t-shirts.

This very proud Bay Area patron let August snap a picture of his pretzel necklace.  We saw so many necklaces we thought that it was something to be bought on site, until we learned that the people wearing them made them themselves in preparation for the day to munch on between samplings.  Here we see arguably the best necklace, for he had soooo many pretzels and with variety (not just tiny, not just thick).

Ale Industries was one of the sponsors of the event.  We’ve covered them before for a Specialty Brews post, so we tried a different and equally tasty brew of theirs today.

Heretic is another beer August tried for a post, and we were enchanted by the fanciful Evil Twin tap handle. 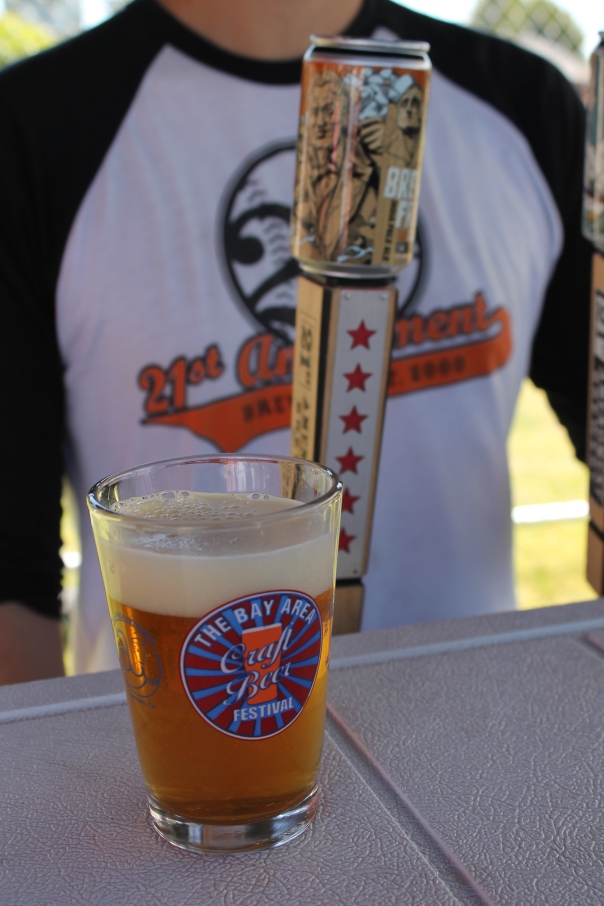 21st Amendment Brewery is actually a San Francisco brewpub.  We’ve tried some of their beers in the past, bought in cans at the grocery market, but now it’s on our list to visit the location.

zach and lil brother will waiting in line for cupcakes

Just a candid shot with an older photobomber behind Zach.  And Will had to be goofy, too.

Cali Common, a steam brew from Lucky Hand like one we’ve covered for a post, is organic and award-winning.

From Triple Voodoo we tried the Kraken and the Witopia, both excellent in taste and body.  August wanted to shade her face, and of all the logos on baseball caps this was the most appealing, so she got one for herself.

Speaking of beer-hat fashion, check out this guy.

no matter what, you can’t escape modern technology’s influence

We did not use this feature, but still thought it was pretty neat. 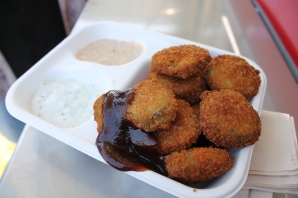 There were multiple food vendors, but we looked for the items specifically made with beer.  The cupcakes were the only sweet beer food, and the savory option was fried pickles with Lagunitas Censored tempura-panko batter from veteran-owned The Fabulous Frickle Brothers.  Will was apprehensive because he “hates” pickles… but he surprised himself and polished these off.  The three house-made sauces were incredible: Cucaracha Sriracha, Frickle Ranch, and Uncle Juan’s Mole-Q.

a version of the logo, nodding to another significance of the day

…And yes, we’re in California, so there were some interesting scents wafting through the air on this particular day…  The Fabulous Frickle Brothers weren’t shy to acknowledge it. 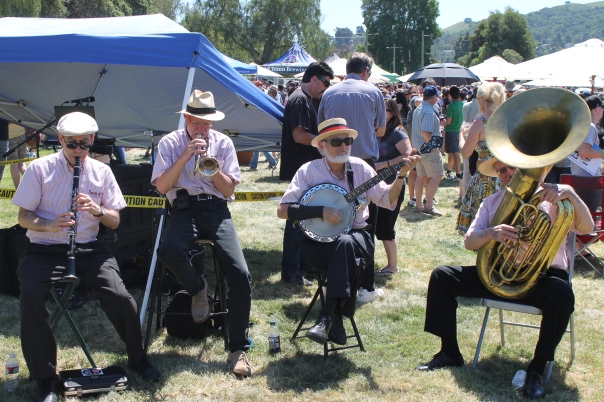 a dixieland band delighted during the interlude between stage sets

Before Petty Theft took the stage for the second half of the afternoon, these gentlemen entertained us with more upbeat, lively music (well, more upbeat than rock)

You can imagine that Karl Strauss‘ bumper sticker schwag was yanked quickly, well before we got to the tent.

More fashion shots, though not beer related.  Being a teacher, August had to get a snap of this. 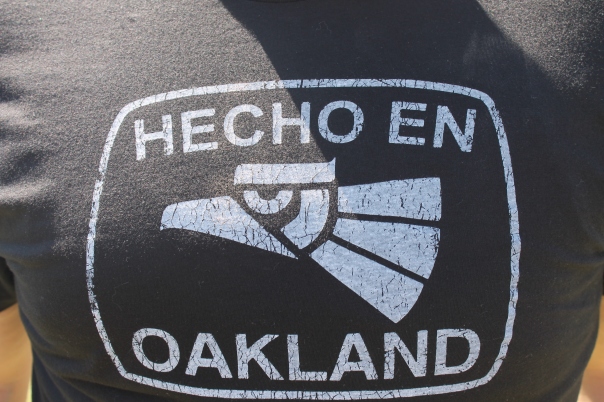 And being a Spanish teacher, she was just teaching the grammar concept of “hecho” to her Spanish II students this last week, so she was thrilled to find an example in the real world to bring back to class. 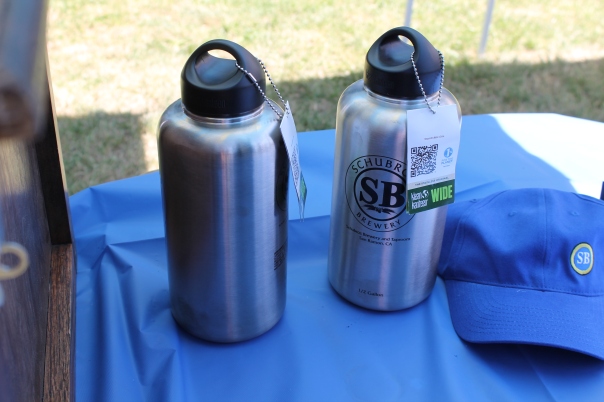 schubros brewery had growlers on display

Schubros Brewery, whom we have written about before, has two styles of growlers to bring to their tap room, which is open on Fridays, Saturdays, and Sundays.  We really enjoyed their Wheat Nico beer on tap today.

We walked up to Bayhawk Ales thinking it was a local brewery we hadn’t heard of yet, but it’s from another bay, down in Orange County.  At least it’s still Californian, if not from Nor Cal.

the infamous great white surf board

Lost Coast‘s (arguably) most famous brew is the Great White, with its iconic bitten surf board on the label.  It was fun running into it in real life.

The West Coast IPA from Green Flash had 95 IBU, super bitter like August likes it. 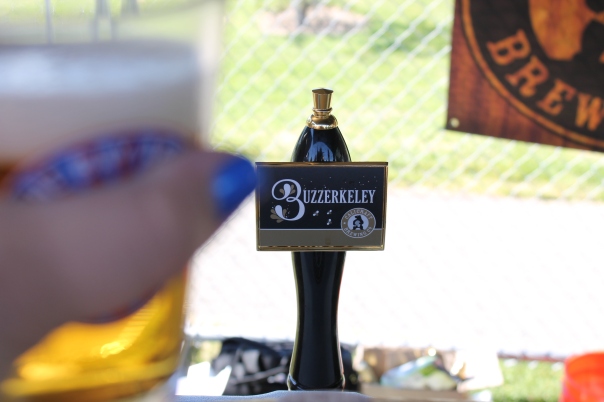 Calicraft was covered before when August tried the Oaktown Brown, and Zach, liking sparkling, lighter beverages, was all about the Buzzerkeley today.  A Belgian and champagne yeast blend with California starthistle honey, it was definitely “zesty, bright, fruity, and tart.”

Calicraft really liked us and appreciated us having already covered them, so they gave us a bottle of Chez Panisse Farmhouse Ale, brewed for the restaurant‘s 33rd anniversary.  It’s in the fridge chilling so that August can write about it this week for its own featured Specialty Brews post. 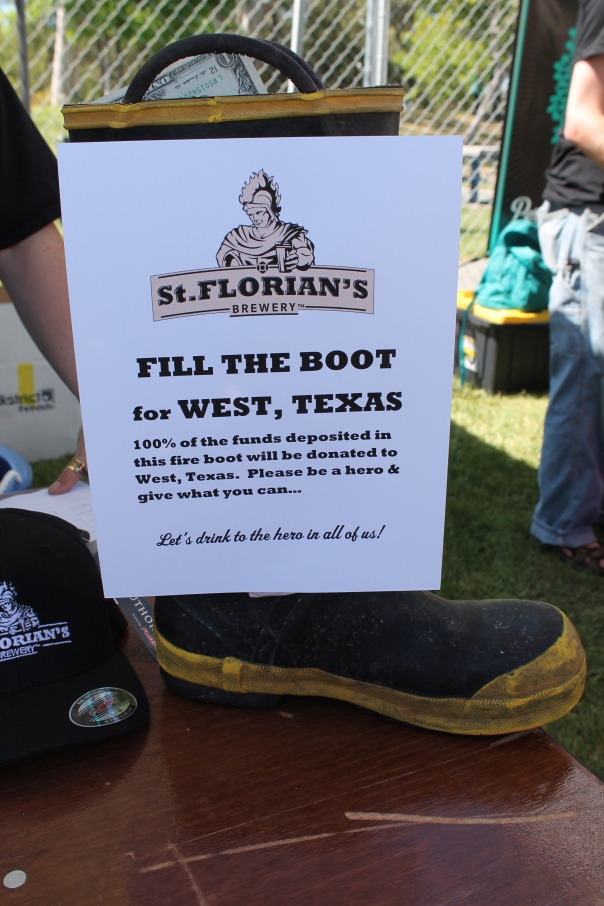 even when celebrating beer, we still care about the realities happening around us 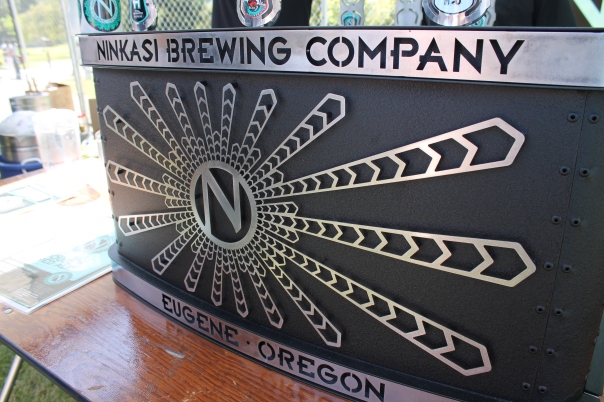 ninkasi brewing had perhaps the most artful keg refrigerator

Ninkasi of Oregon rounded out our tour of specialty brews.  Coming up on its seventh birthday, Ninkasi has grown quickly to feature over thirty varieties of beer.

stephanie was the most spirited at the event

We met Stephanie, another patron in a very festive mood.  Her boyfriend Nick with friends Jess, Sean, and Mike started Stacked Asses, a home brew that was featured at the home brew tent for small, not-quite-yet full-fledged breweries.  We wish Stacked Asses the best of luck in their budding future.

Despite a lobster-red sunburn, we had a great time at the festival.  It was organized very well and everyone was safe and happy.  We can’t wait until next year!