Baskin Robbins is a place of nostalgia for both of us.  August was typically stuck on bubble gum or mint chip, while Zach favored cookies & cream and standard vanilla.  We both got a sweet tooth this Friday evening, and started brainstorming about dessert.  It occurred to us that we hadn’t been to Baskin Robbins in many years, so we figured, could the ice cream be as good as we remembered?  We were much younger and our palates have changed since, so tonight was a mini adventure to go to the Oak Grove Road location. 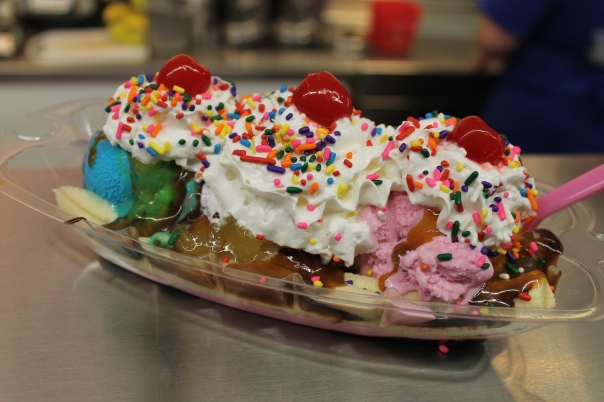 Zach went for a traditional banana split with three scoops, but jazzed it up with lots of fruitiness.  Atop the sliced banana were, left to right in the photo, Wild ‘N Reckless Sherbet, Apple Cinnamon Crisp, and Cherries Jubilee.  Before pumping out whip cream, masterful sundae maker Devin drizzled hot fudge and caramel sauce, and spooned on chunky pineapple preserves.  No unprocessed nuts for Zach, so he opted for rainbow sprinkles and cherries.  The sherbet was a swirl of multiple fruit flavors with tanginess, and it was light in textures therefore refreshing, and 4 oz. have only 160 calories.  The apple scoop was Zach’s favorite of the three, super rich and creamy with a true apple flavor and ribbons of Brown Betty crumble for a contrast in texture.  The cherry ice cream was also rich and creamy (but not as rich as the apple ice cream at 260 calories per 4 oz.), with cherry chunks and a light rum flavor to set off the strong cherry flavor; it clocks in at 240 calories. 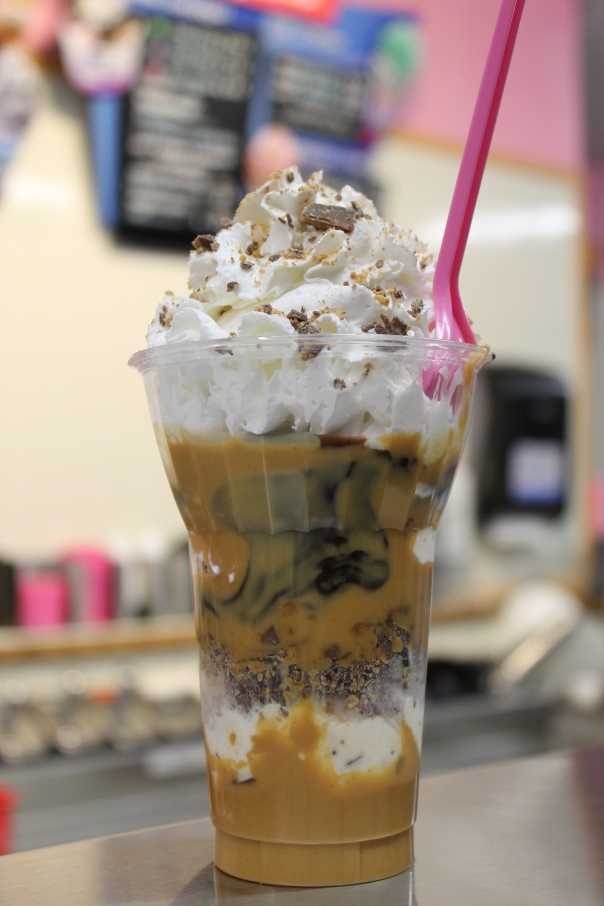 Also on the Premium Sundae menu was something that wasn’t around when August was young – a fantastic Reece’s peanut butter cup-based marvel.  She would have been gobbling these for years had she known before today of its existence.  Three scoops of vanilla with Reece’s cups mixed in, hot fudge, peanut butter sauce, more crumbled Reece’s cups, and whipped cream combine to make a divine dessert. 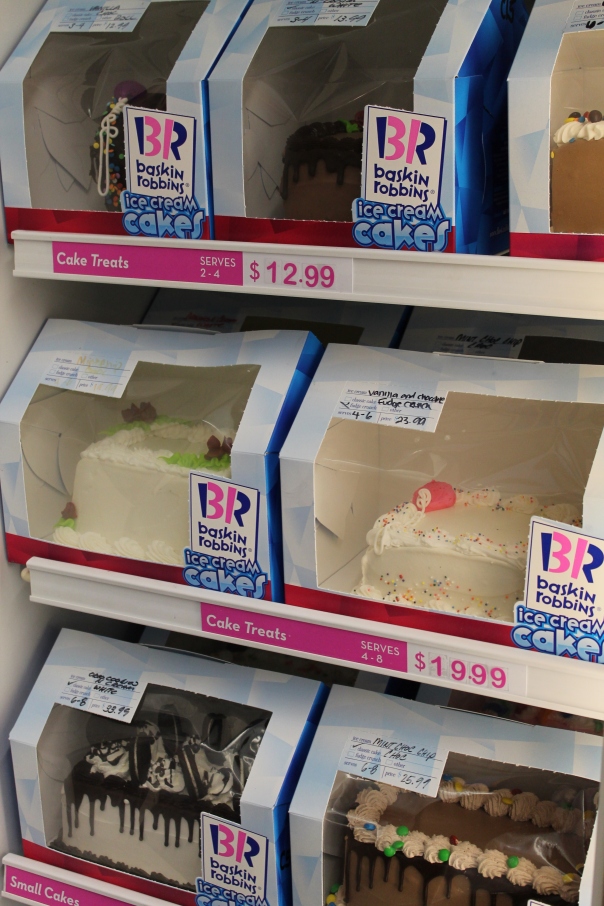 Don’t forget that they have prepackaged quarts and pints, and also ice cream cakes if you’re in a pinch and need a celebratory something.  One of August’s most memorable birthdays from her youth involved an ice cream cake.  Shift leader Devin and trainee Kyle were were friendly, patient, and helpful in building our delicious sundaes.  There are locations in close to 100 countries, and hopefully the one near you will have such warm employees serving your cold delight.