Zach’s brother Will came with us tonight to the San Francisco Creamery to celebrate our 50th post – this post!  August frequented this place when she sold pianos a few blocks away, but neither Zach nor Will had been here before.  To celebrate, we needed a third person anyway, someone to try the Kitchen Sink challenge. 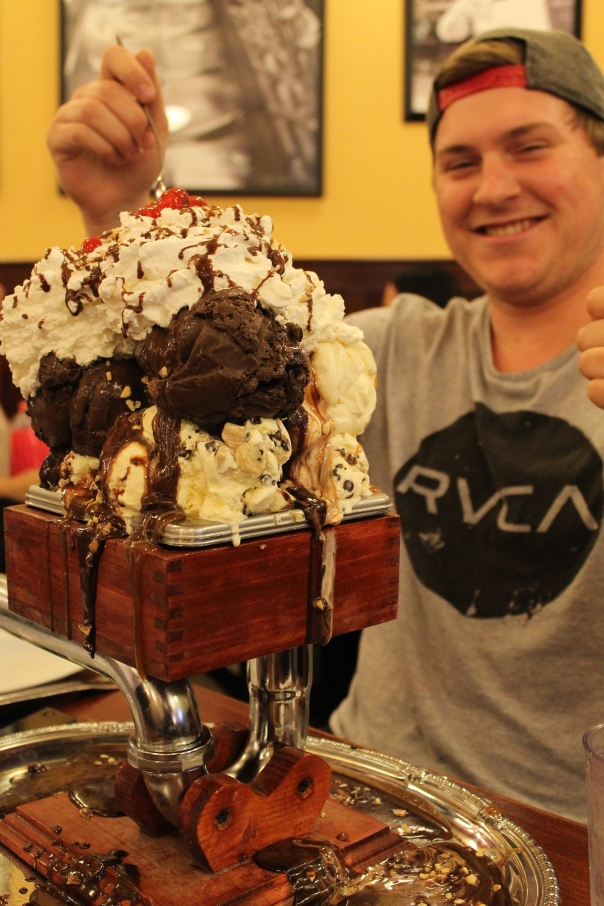 will gazing at his kitchen sink

To get it for free Will needed to beat 10 minutes, the current record.  To get on the Wall of Fame he needed to eat three sliced bananas, eight scoops of ice cream, mounds of whipped cream, toppings, and cherries.  For his ice cream flavors he got chocolate fudge brownie, chocolate chip cookie dough, and cake batter.  His toppings of choice besides the obligatory whipped cream and cherries were chocolate fudge, chocolate syrup, caramel syrup, and diced almonds.  He narrated the flavors of the ice cream while digging in, noting that each was as rich as the next.  Each flavor had a distinct texture, ranging from creamy to fluffy, so there was nice variety amidst the cold, cold dessert.

Zach had to try the Three Little Piggies, a sandwich with pork done three ways.  With sliced ham, pulled pork, bacon, cheddar, honey mayonnaise, barbeque sauce, fried onions, and lettuce, this originally comes on a toasted Kaiser bun.  We didn’t know the bun came with seeds on it and Zach can’t eat unprocessed nuts and seeds, and so we were very impressed when our waiter quickly suggested grilled sourdough and the kitchen immediately swapped out the bread.  The sliced ham was succulent and sweet; the bacon was crispy with a mild saltiness; and the pulled pork was tender with nice smokiness.  He also chose the option of adding Sriracha to the barbeque sauce to make the sandwich spicy.  Fries are not a standard side so you can substitute them for $1, but for $1.75 you can get garlic fries.  These were done properly with fresh garlic. 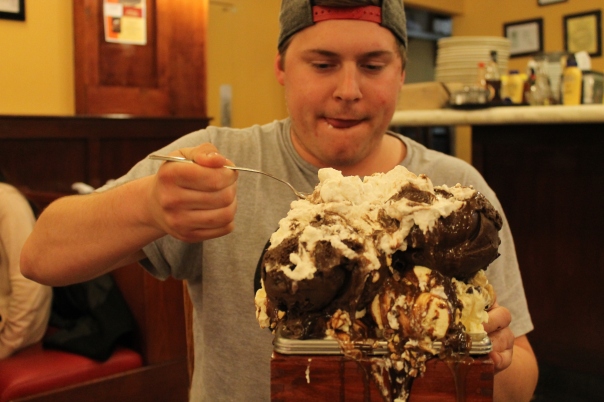 Will kept eating as best he could but showed signs of slowing after 13 minutes.  That was enough time to determine that cake batter and chocolate fudge brownie were his favorite flavors, although if he finishes this challenge, he probably won’t want to have them again for a while.

August always likes avocado, being that it was her first food.  Avocados and sun dried tomatoes are added to this sandwich of simple chicken salad with mayonnaise, celery, and “special spices.”  The toasted focaccia bread was spiced as well, so even though the chicken salad itself didn’t boast many ingredients, the flavor was deep.  Zach has a suspicion that the chicken salad is made to order, since it tasted fresh and the flavors were distinct, not like they had been marinating together throughout the day.  August chose one of the standard sides, coleslaw, which was always her favorite side at the SF Creamery anyway, and it was as she had remembered it from years ago. 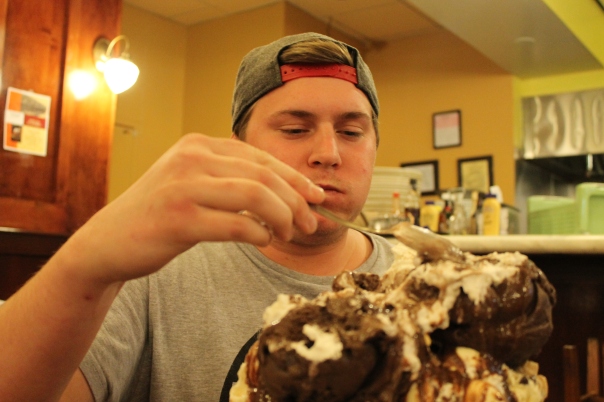 So to check in with Will, did he finish his Kitchen Sink in 10 or even 30 minutes?  He tried, but alas, he did not.  Zach and August helped out after Will was done, but even between the three of us we couldn’t finish it!  Granted, Zach and August had eaten a meal already.  If you don’t want to take up the challenge, though, you can always bring a group of friends and dig in together just for the fun of it.